Look away into the distance
and find yourself

In the very heart
of the Rhône Valley

At the foothill of the Dentelles de Montmirail, the Côtes-du-Rhône Villages Plan de Dieu appellation extends. It is here, that for thousands of years men and women have worked with humility and discretion to reveal an exceptional terroir. A discreet appellation but with a strong character.

The origin of the name of the appellation is mainly attributed to the sisters of Prébayon Abbey who tended the land in the Middle Ages. The girls who joined the religious orders in this cloister situated in the Dentelles de Montmirail mountains came with a dowry often made up of land which was worth nothing in those days.
In the Middle Ages, the region, and particularly this huge plateau with its dense forests, was full of brigands and other robbers who ambushed travellers. So, when travelling in the region, it was best to put yourself in God’s hands! 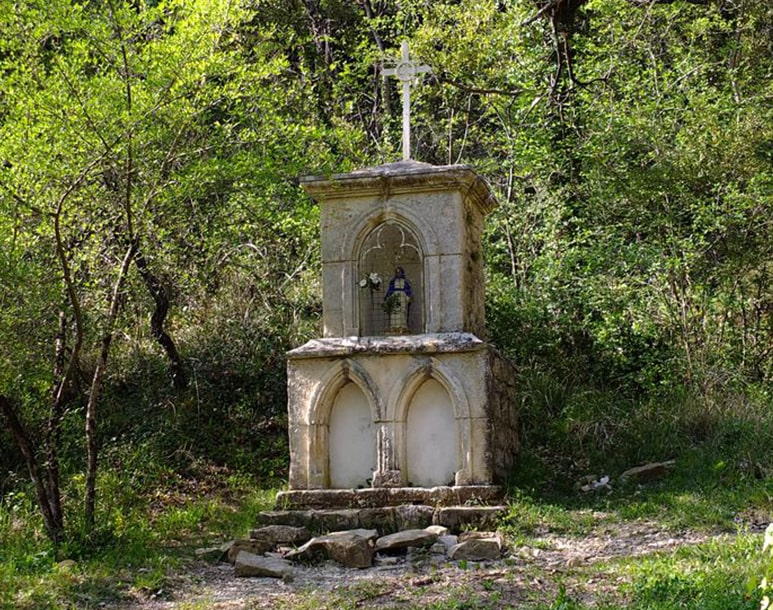 For a long time, vine cultivation was abandoned on Plan de Dieu, but in the 1920s a company called Fly Tox decided to grow pyrethrum there, but this activity was rapidly delocalized and the site became wild again. 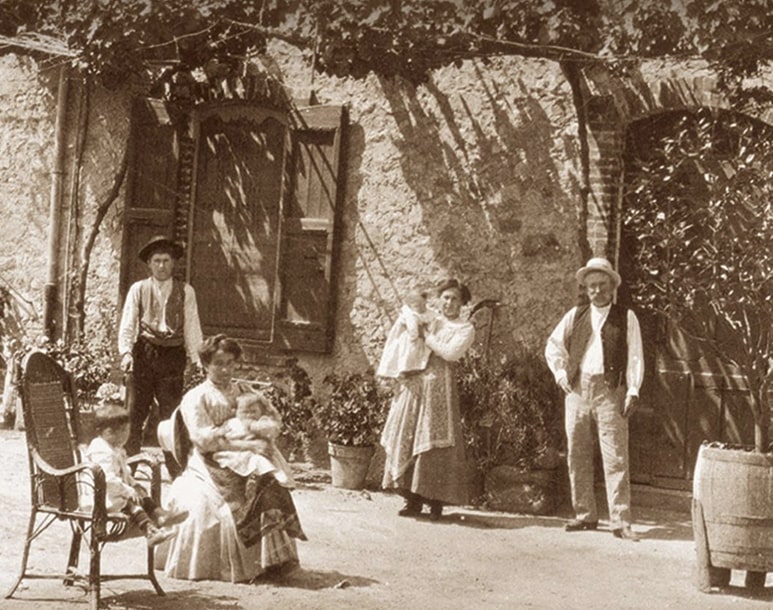 After the Second World War, the visionary Gabriel Meffre, on his return from mobilisation in Tunisia, saw its potential to resemble the big Mediterranean vineyards cultivated using Bull machinery and American earth-flattening equipment. So, the Plan de Dieu parcels were gradually brought back into use after a major demining operation. This was necessary because the Plan de Dieu region was a strategic military site due to its aerodrome and, as a result, had been heavily bombed. 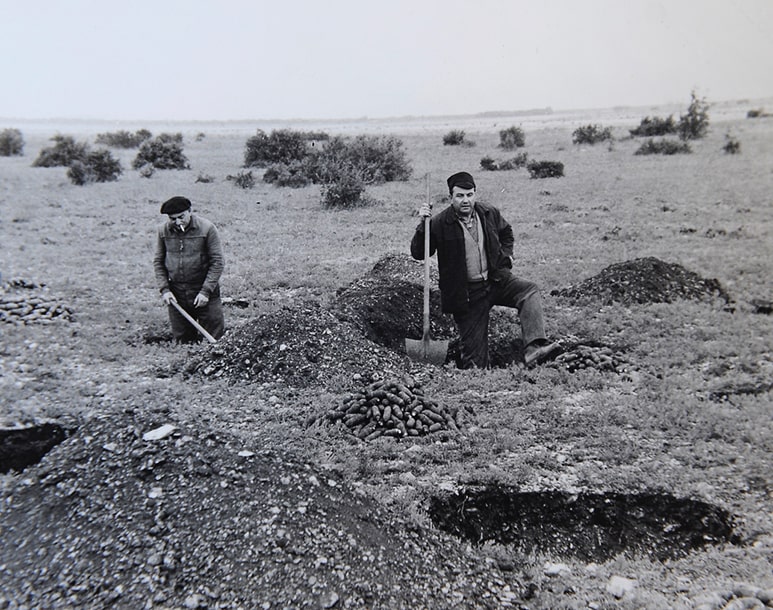 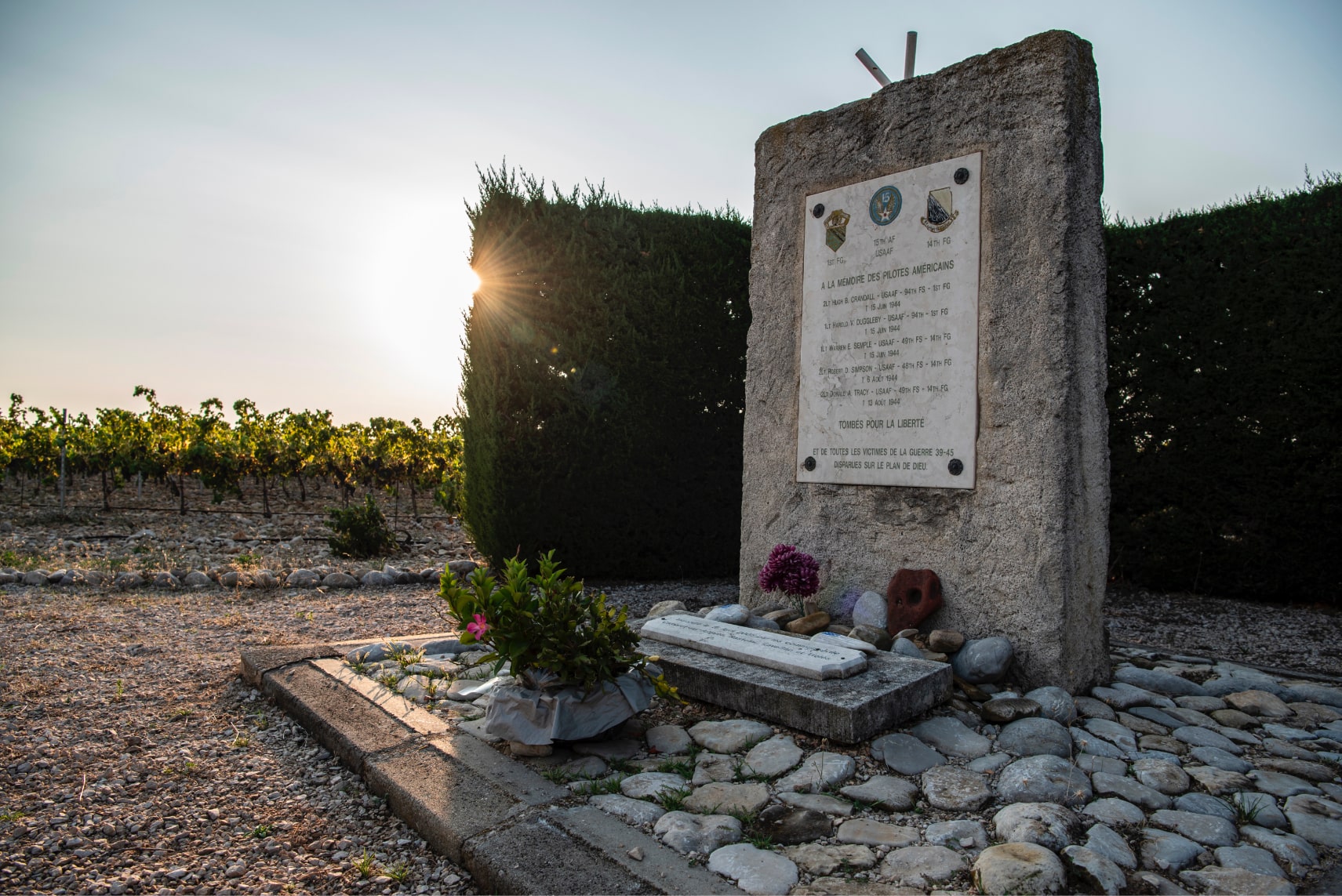 A stele in memory

of the American liberators 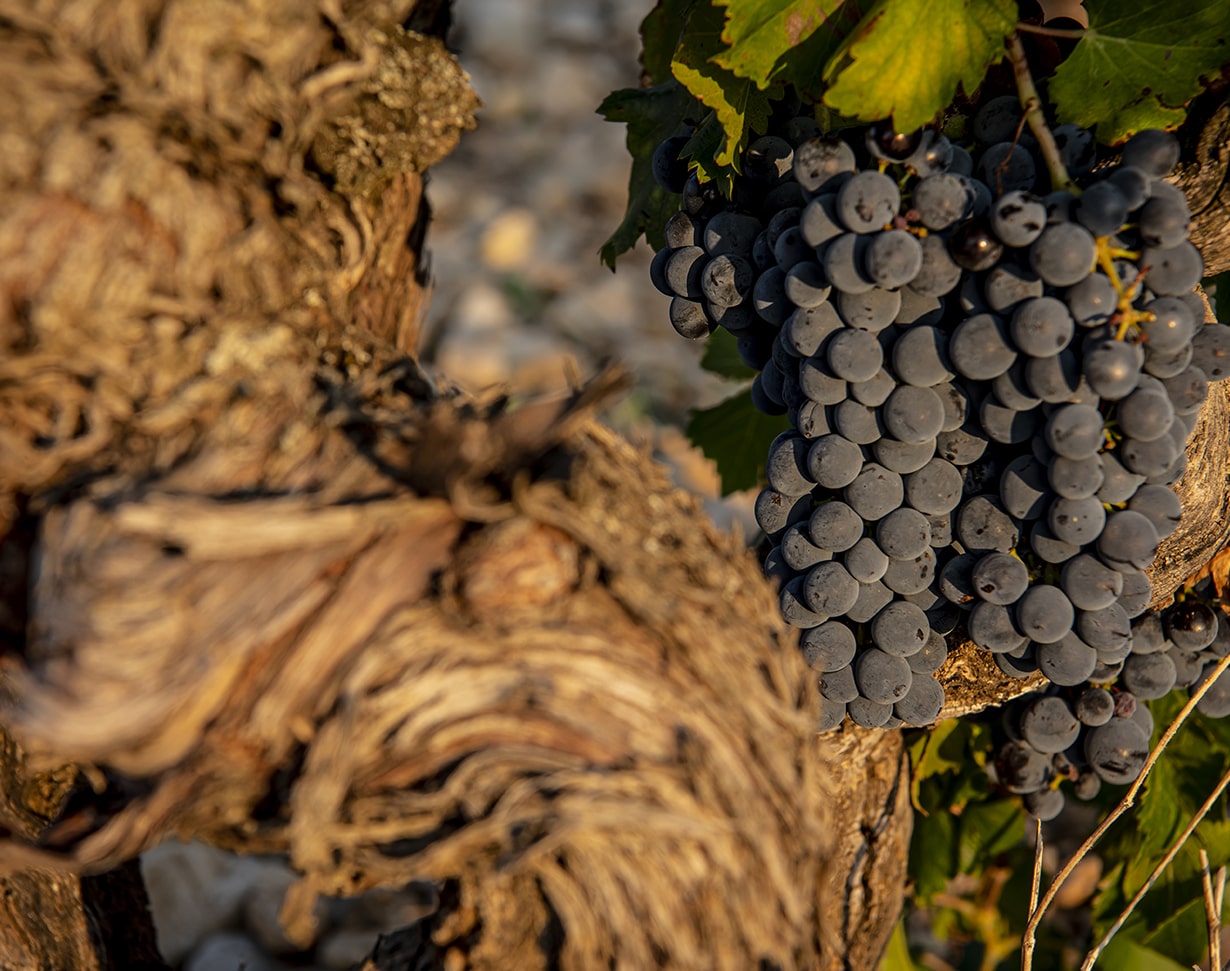 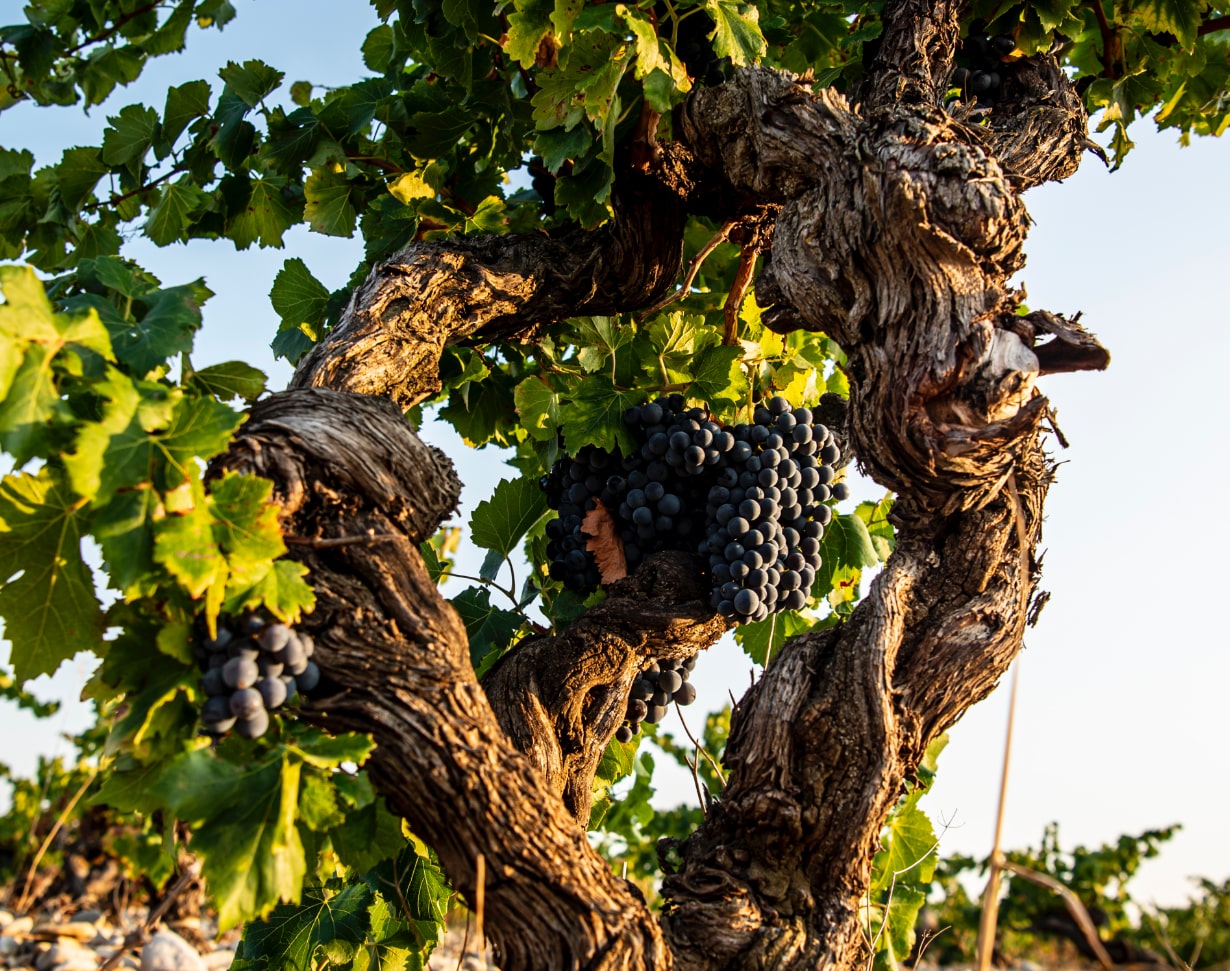 This vineyard of 1500 hectares is situated at an altitude of 110m, to the east of Orange and surrounded by four villages: Jonquières, Violès, Camaret-sur-Aigues, and Travaillan. Bathed in sunlight, it also benefits from the cleansing virtues of the strong Mistral wind.
The few remaining woods are dispersed within this vineyard set on a bed of red clay and a multitude of large rounded pebbles which sink down into the earth to a depth of ten metres. Due to this significant thickness, the terrains are skeletal and produce little: hardly more than one bottle per vine!

We make red wines only, using three flagship Côtes-du-Rhône varietals: mainly Grenache, blended with Syrah and Mourvèdre. On this terroir, their combination gives shimmering, deep-coloured, dense wines with concentrated aromas of red berries, spices and scents of the surrounding scrubland: fragrances of thyme, bay and undergrowth. With time, they evolve towards notes of leather, aniseed and liquorice. 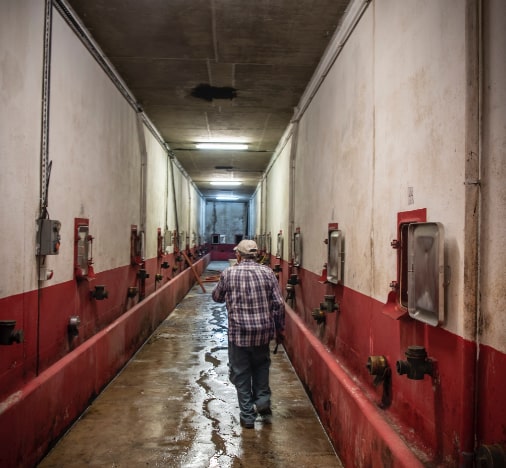 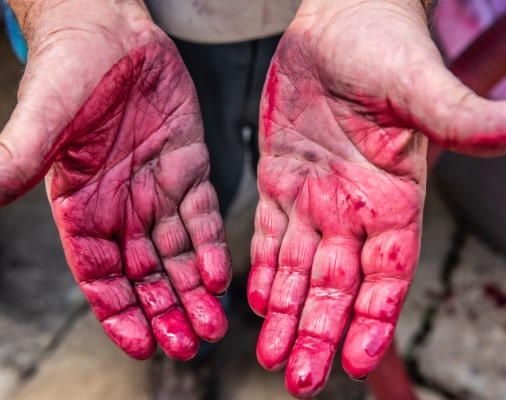 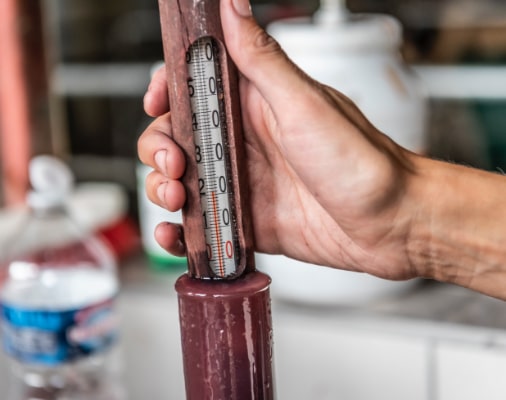 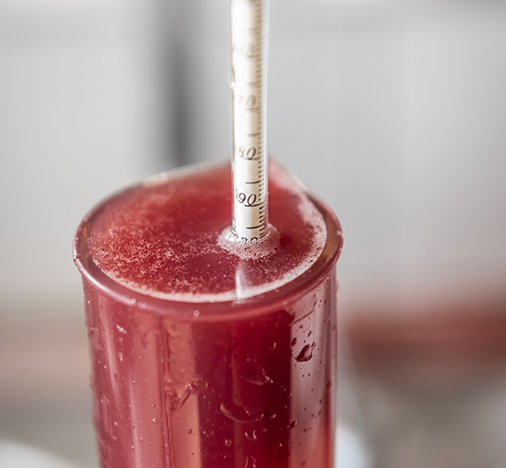 The key to the success of Côtes-du-Rhône Villages Plan de Dieu is not divine intervention but the work of men. Thanks to the homogeneity of the terroir, our producers obtain wines that are equally homogenous and, when we taste them, we discover that there is not a great difference between their wines, apart from the personal touch of the winegrower.

Come and get to know the 65 winegrowers of our appellation. 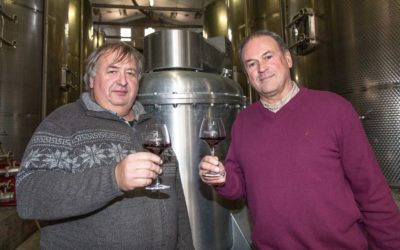 Once again, the Plan de Dieu Appellation proves its regularity. It did withstand climatic variations without difficulty. Neither the spring drought - which lasted throughout the summer - nor the high temperatures of July and August affected the quality of the vintage....

END_OF_DOCUMENT_TOKEN_TO_BE_REPLACED 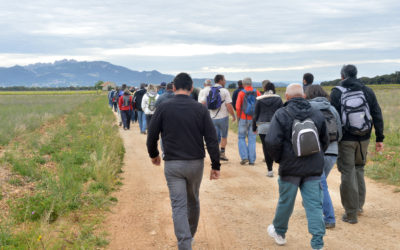 Fancy discovering the Plan de Dieu Appellation while taking a breath of fresh air? Every last Sunday of April, all disciples of Dionysus are invited to join the 9-kilometer « Balade de Plan de Dieu » by walking through the vineyards from one cellar to the other with a...